This private customer already had a two manual and pedal organ of ours in his home in Woods Hole, Massachusetts. This instrument has become such a part of the family that, when they refurbished their home in Washington DC, they decided an organ should form part of the re-modelled home.

We then embarked on a series of ideas and proposals, none of which quite clicked with the ideas for the room. Then they hit on the idea of making an organ in a style similar to the 17th century chinoiserie bureaux which were fashionable in England and France at the time. This idea fitted in with a number of aspects of the house and garden but the task of marrying the style and an organ proved something of a challenge.

Much thought and research was undertaken to investigate what the possibilities might be, and finally an outline design was produced which looked as if it might have potential. The task then was to make it technically feasible and to find somebody who could decorate the casework in genuine chinoiserie with the proper gilding and raised gesso. 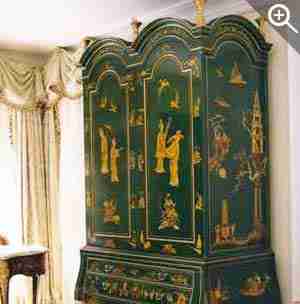 When out of use, there was to be no indication that this was an organ, indeed, it was intended that it should look like a period cabinet. Ultimately, a decorator was found, who also helped us with details of the casework.

The keys and music stand retract, enabling the doors to be closed over the front, and the decoration all in appropriate style tells some of the story of the family and the transportation of the organ to their home.

The organ was exhibited at the International Organ Festival in St Albans, in 1999, where it caused quite a stir. Nothing quite like it had ever been seen before. Indeed, we believe this is the first instance in which a chinoiserie bureau has been used as an inspiration for an organ.

It brings back memories of King James travelling organ that also had Chinese style decoration but without any attempt being made to look like anything other than an organ.

View the Specification of the Organ (completed 1998)