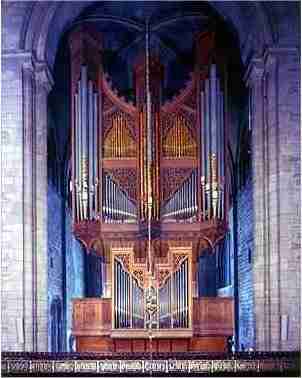 The Chichester Cathedral organ contains pipework by many famous English builders, including Renatus Harris, George Pike England and the Hill family. Originally mounted on the rood screen, it was moved to the North transept shortly before the disastrous collapse of the spire in 1861, thus escaping serious damage.

The magnificent double case, designed by Dr. Arthur Hill, was added in 1888, incorporating some decorated display pipes from the 1678 instrument by Harris. It is one of the finest examples of Hill's work but unfortunately was never more than a facade, leaving the sides and back of the instrument exposed. When Hele of Plymouth finally enlarged the organ in the early years of this century, the Swell box was cantilevered precariously backwards, and the appearance from the aisles and transept left much to be desired.

In its final form, the organ had three manuals and 35 stops, although a small fourth manual had been prepared for by Hill, but never installed. From 1904 the action was tubular-pneumatic, although the stops had been converted to electric operation in the 1950s - and it was the failure of this final modification which led to the unreliability which brought about the temporary abandoning of the instrument between 1973 and 1986. During this time, the services were accompanied by an electronic, now transferred to the west end for occasional use in concert accompaniment.

When it was decided that the time was right to review the future of the instrument, several factors were considered important. Clearly, the organ must be put into good mechanical order, and a return to tracker action seemed sensible. Most of the soundboards had suffered from overheating, and since they were the work of three different builders, replacement with a uniform modern design seemed advisable. The appearance of the organ from the transept must be improved.

Although there was no desire to alter the justifiably famous existing tonal character, the Pedal section - consisting of only four stops -seemed a little undernourished. Further, the addition of a modest new Solo department would allow the provision of some larger flutes and a moderately bold Posaune, without disturbing the excellent balance of the existing choruses.

Finally, the distribution around the building of the speakers of the electronic organ had shown the benefit of greater congregational support in the nave; rather than compromise the splendid potential for choir accompaniment possessed by the main organ, it was decided to add a small Nave organ in the nave triforium, played from its own console, but also usable from the keys of the main organ.

The organ was dismantled in 1984, and reconstructed and reassembled during 1985. The structure, soundboards, action and winding are all entirely new. The action is now tracker throughout, without any pneumatic or electric assistance. The drawstops are also mechanical, but have additional electric solenoids to allow the provision of a full set of aids to registration.

View the Specification of the Chichester Cathedral Organ (completed 1986)