This organ was originally built as a chamber organ for St John's Smith Square, London.

But before it was delivered to St John's, it was used during the wedding of HRH Prince Charles to Lady Diana Spencer in St Paul's Cathedral in 1981.

The organ was then sold to Princeton University in 1991 where it was kept in the University Chapel for some 12 years.

When it became surplus to requirements, Princeton University sold it on eBay and it was bought by the Harpsichord Clearing House in Massachusetts where they kept and enjoyed it for a few years. 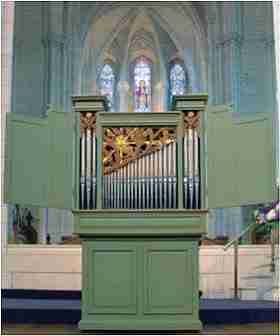 In 2006 the organ was bought by the Auckland choir Musica Sacra and its conductor Indra Hughes. It was inaugurated in its new home in a concert by John Scott, who had played it at the royal wedding in 1981. The organ is housed in the church of St Matthew-in-the-City in central Auckland. (Photograph by Arie Hoeflak)