The Skinner organ in Princeton University Chapel was installed in the newly-completed building in 1928. Although Donald Harrison had recently joined the company from Willis, and was soon to oust Ernest Skinner from power, the Princeton organ remained essentially in the earlier Skinner tradition - that of the finest and most opulent Romanticism.

The 100 stops of the main organ were divided in two spacious chambers on either side of the chancel, behind twin 16' cases, and a remote Echo section was prepared for at the console. 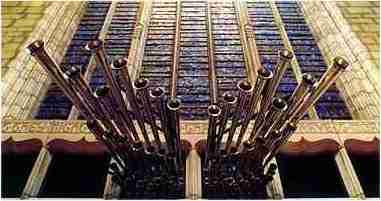 Three of the four manuals were enclosed in huge swell-boxes, and even the Great Organ was partly under expression.

The lavish grandeur of the organ did not entirely impress the first University Organist, the young Ralph Downes. He immediately set about making small alterations - reducing some of the wind pressures slightly, exchanging certain stops one with another, and re-voicing others. These efforts had minimal effect but further attempts were made by Carl Weinrich - Organist from 1943-1973 - to adapt the instrument to the demands of the "Baroque Revival".

Between 1951 and 1954 the Solo Organ was abandoned in favour of a 'Brustwerk' section, and part of the Choir was re-cast as a 'Positiv' - in each case, the pipework was spread over two or three part-vacated soundboards, located in different areas of the chambers. The stopknobs provided for an Echo section were used to control an Antiphonal chorus in the nave triforium, which has been found useful in congregational accompaniment. The heavy-pressure reed choruses of the Great and Solo were disconnected and left in disarray, and we found the mightiest stop - the Tuba Mirabilis - in a pathetic heap in an underground storage area beneath the chapel. Only the Swell remains basically intact to tell us how the instrument must first have sounded - and extremely fine it is. 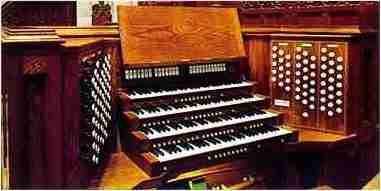 After 60 years continuous use, the actions and console had now worn out, although the high quality of the original workmanship was still evident. It was decided that the rationale behind the scheme of reconstruction would be to retain all that was best and characteristic of the Skinner work, and indeed to re-introduce some of the sounds which had been lost - a new French Horn, for instance, was provided. The derelict families of heavy-pressure reeds have been restored, and the Solo Organ has once again become enclosed, utilising appropriate ranks surviving from the old Choir and Solo.

At the same time, any question of a strict restoration solely on pre-war Skinner lines has been firmly rejected, and the organ has been nudged towards a broader usefulness, albeit in a voicing style compatible with that of the surviving original work. The Great chorus is essentially new throughout, and a new accompanimental, unenclosed Choir Organ has been provided. Apart from the 32' ranks and a couple of borrowed manual doubles, the large Pedal section is now independent.

New slider soundboards were provided throughout, together with new actions, console, winding and supporting framework. The Great, Swell, Choir and Pedal Organs are in the South Chamber, and the Solo in the North Chamber. The Nave section is in the North triforium.

The organ was dismantled in May 1990 and completed shortly before Christmas 1991. The re-opening recital was given by Thomas Trotter in April 1992.

View the Specification of the Princeton University Chapel organ (completed 1992)