Amid grandeur, a subtle palette ... One was struck by the transparency and tactile loveliness of the sound ... Kent Tritle ... sought a versatile religious and musical instrument which, it seems, he has found. This organ, designed to have a French Romantic character, but with enough versatility to allow it to reach back into the music of the Baroque era, flourished under the hands of David Higgs The result was impressive indeed ... Music listeners in New York will be the beneficiaries.

Such was the critical acclaim following the Inaugural Recital played by David Higgs on the four-manual organ on the West gallery of this impressive church on Park Avenue, New York. With 68 stops and 91 ranks, this is the largest mechanical action organ ever to have been built by an organbuilder in the British Isles. When the doors of the church were finally closed (leaving some 200 people outside and disappointed), there were approximately 1,800 people in the audience.

As the specification shows, the organ draws on the French Romantic era for inspiration. But it also goes much further in its development to provide an instrument of versatility and integrity matching both the musical demands of the church's liturgy and the wide ranging requirements of St Ignatius Loyola's extensive "Sacred Music in a Sacred Space" series.

An English organ builder constructing an instrument in the French style in America is not, perhaps, the most obvious combination.

But if one is aware of the aims of the staff and music programme at St Ignatius Loyola, and that of Kent Tritle in particular, the rationale behind the combination does start to become clearer. 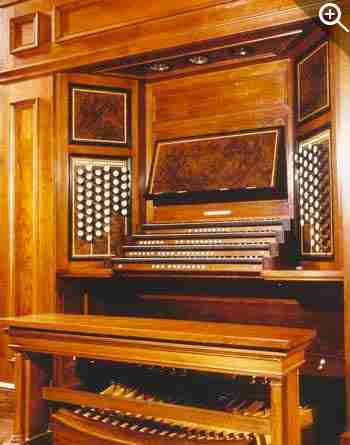 Perhaps the first thing to say is that the organ at St Ignatius Loyola in New York is not a slavish copy of a mid-19th-century French organ, let alone a copy of a Cavaillé-Coll. The style was used as a starting point rather than an end in itself.

The mid-19th-century French organ has an obvious relationship to the liturgy of a Jesuit church with an active music programme. But to have restricted the style to that would have placed too many limitations on the general versatility of the organ. In the recent past, attempts have been made to mitigate the limitations inevitably inherent in copying a particular style by the introduction of elements from different and often disparate schools. The consequential lack of blend has sometimes given rise to what is in essence a number of smaller organs masquerading as a large one.

How then to satisfy the requirements of a modem instrument to perform musically, if not strictly authentically, a large part of the rich repertoire for the organ? How could the request to provide an instrument with a French romantic flavor be acceded to without excluding the repertoire of the earlier French eras, not to mention the non-French literature? How could it be made sufficiently true to the chosen genre to afford players in the New York area the unique opportunity to gain a deeper understanding of the music of Franck, Duruflé, Messiaen and later? How could we ensure that the liturgical requirements were satisfied first and foremost but still afford sufficient character to provide an exciting concert instrument?

The combination of the varied requirements led to a great deal of discussion during the initial planning stages between Kent Tritle, the consultants, and ourselves. Our main objective was to ensure that the whole instrument had integrity and a feeling of oneness. For this reason we decided that, rather than attempting to incorporate different styles in the one organ, we would approach the problem from the other end and develop the core style sympathetically, whilst staying true to the core itself.

At an early stage in the planning, we visited a number of appropriate instruments of Cavaillé-Coll (being the obvious candidate for investigation of the French organ of the 19th Century), intentionally spreading the selection over as wide a period of his work as possible. Our first discovery was that it is very difficult to define the Cavaillé-Coll organ at all. There are wide variations in style, from the almost Dutch classical at St Omer (1855) to the high symphonic of Rouen (1890). Our perception of the Cavaillé-Coll organ is, perhaps, influenced too heavily by the Parisian instruments in general and that of St Sulpice in particular.

However, the study of these instruments actually gave us the clue as to the best way forward. In particular, we were able to appreciate the way Cavaillé-Coll could base a new instrument around existing pipework and cases, yet still producing an exciting and interesting result with the integrity essential to any good instrument. It was especially instructive to see how he could achieve this, still providing an organ that bore his own unmistakable stamp.

With this appreciation, we decided to base the new organ for St Ignatius on the middle period of Cavaillé-Coll's own work, developing it whilst remaining true to the fundamental style.

For example, a Positif de Dos was included but the pipework was scaled and voiced in the same style as the rest of the organ. Very few, if any new organs of the mid-19th century in France had a Positif de Dos, as the Positif was usually incorporated within the main case. The Grand Récit was developed to provide the grand Swell Organ effect demanded of an instrument of the late 20th Century.

The important requirements of a Franck-style Récit, which could not have been realized in a large department, were satisfied by the Petit Récit on the fourth manual, also the home of some of the important Solo elements. The Pedal was developed to be as complete and independent as possible.

Finally, some registers which would have been foreign to a true mid-19th century French organ were incorporated but these were always scaled and voiced in a style firmly in keeping with the rest of the instrument.

Without proper attention to the starting point, the result could well have turned out to be bland and of indeterminate character. However, whilst voicing the organ, we continually ensured we were staying faithful to our model.

As we progressed with the voicing, we frequently listened to pieces of the French repertoire played on the organ to guarantee we were neither straying too far away from our selected inspiration nor that we would miss important details in our attempt to develop the overall style.

The result, we hope, is an organ with a voice of its own, perhaps an English organ speaking with a strong French accent in some respects. Our aim was an instrument capable of producing a musical result, accepting that the gain in character might to some degree limit true authenticity. Above all, however, we wanted to create an instrument which is unashamedly of our own era, one which can stand proudly as a representation of late 20th-century organ building.

View the Specification of the organ of St Ignatius Loyola (completed 1993) and pipe scales.

Here is a recent review of the St Ignatius Loyola Organ translated from Dutch and a video below so you can see and hear the organ being played.

Posted in USA
← St Agnes RC, New York, USASt Paul’s Episcopal Church, Norfolk, Virginia →
Scroll To Top
This website uses cookies to improve your experience. We'll assume you're ok with this, but you can opt-out if you wish. Cookie settings ACCEPT
Cookies Policy