Just occasionally, we organ builders will be asked to produce something rather out of the ordinary. In June of 2013, we received a telephone call from a firm called Bompas and Parr asking if we might be able to produce a special organ to promote Johnny Walker Blue Label Whisky. It doesn’t come very much more unusual than that. Bompas and Parr (B&P) is a firm specialising in making large jellies of various things such as buildings and also in producing fragrances for various installations, such as the 2014 Thames New Year firework display. The things they do are whacky and off-the-wall in the extreme and you can read about some of their exploits at http://bompasandparr.com/ Why an organ? Well, following some research into how flavours are perceived, it was discovered that the experience of almost any flavour can be enhanced by adding music and visual effects. It is not really as far-fetched as it may sound. Think of the difference in the experience of a fine wine drunk from a beautiful glass or a plastic cup, or music played on an organ with a beautiful case, rather than an ugly one. Eyes, nose, taste-buds and ears can all be engaged in an experience to make the whole greater than the sum of the parts.

Bompas and Parr had researched some of this and found references in the literature. J K Heysmans novel A Rebours and Aldus Huxley’s Brave New World both contained references to a flavour organ which gave taste to music. Oxford professor, Charles Spence had researched taste and pitch, as well as sound quality to match particular tastes in whisky to certain musical sounds. All very well in theory, but how would a pipe organ fit into this scene? 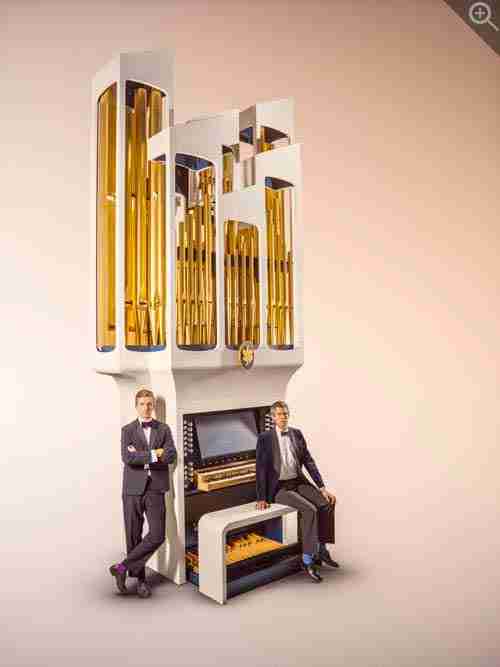 Non-Disclosure Agreements were signed, Dr William McVicker was brought in to act as advisor to Bompas and Parr and some fairly vague ideas were discussed regarding what form the organ should take and what it might look like. Our biggest problem was that at that point no music had been written and the selected composer, Simon Little, didn’t have much idea as to what the possibilities of the organ might be. Furthermore, the organ was to be controlled mostly by computer, alongside sound effects and electronically generated music, as well as the projection mapping visual effects. It was just as well that part of the organ was to be controlled by computer as the music the composer finally produced required more hands and fingers than an organist might have. In addition, the keys relating to the notes the computer played had to move.

There was one further minor point to be tackled. The organ had to be made so that it could be transported to anywhere in the world and assembled and tuned by two people, ready for use within twelve hours of arrival at the destination venue. In fact, we managed to design the organ such that we are able to complete the installation in no more than six hours.

Firstly, a little educating had to take place, so visits were made to various small and not so small organs, where the composer and representatives from B&P were introduced to what might be manageable within the brief, the organ we built for the Mansion House (now in Westminster Abbey) being a key indicator of the possibilities.

Various case designs were batted back and forth . . . .

Various case designs were batted back and forth, until the outline design of the organ was proposed by B&P, which then had to be translated into something which would work with real pipes.

John Mander and William McVicker were, in the meantime, attempting to dream up a specification which might offer the composer the maximum of resources for his compositions, which had not at that point materialised. It had to be a two manual and pedal organ, that was clear. It was also evident that the organ would have to be a unit extension instrument, if the brief of transportability and speed of assembly were to be realised. We therefore decided that there should be five ranks as below:

A Bourdon/Flute rank 16ft to 1ft

A Diapason/Principal rank 8ft to 2ft

But how to split these over the two manuals and pedals? At this stage there was still no music composed, so, at William’s suggestion, both manuals were given the same specification, to afford the composer the maximum flexibility and allow him to use the manuals as he wished. So each manual has 13 stops and the Pedal has 7 stops. 33 stops from five ranks of pipes, what other cardinal rules of decent organ building could one break? Well there were a couple. We were just able to have full length pipes for the Flute and Principal ranks, but the Trombone/Trumpet rank had to be half and quarter length. Worst of all, the organ played alongside electronically generated sounds, which under some circumstances could be controlled from the console. Would Mander Organs be ejected unceremoniously from the IBO?

Gradually the organ came together, the composer produced the music, all written on computer, the organ was mapped with laser in preparation for the projection mapping and once the organ was finished, the composer finally had an impression what it could do, which resulted in some considerable rewriting of his music. The organ was taken down and re-erected in St Peter’s Church opposite the works and all the elements were finally brought together and the MIDI files debugged, till organ, electronic sounds and light show were forced into an arranged tripartite marriage of function, if not of convenience. Although we would by no means advocate the building of 33 stop organs from five ranks of pipes, the result was surprisingly good, rather better than it ought to have been, no doubt in part because we resisted the temptation to derive the mutations from the unison ranks. It is the first organ we have built with a Tierce 4/5ft and may well be the last too!

The master blender of Blue Label Whisky had identified six distinct flavours of the whisky. These were:

A Master of Ceremonies was engaged to talk the guests through these various flavours and he would describe how they were to be appreciated and what they were, which was followed by or intermingled with the music and light show, projected onto the organ. Each guest had a small glass of the whisky and a glass of ice-cold water and asked to sniff or sip from the whisky when instructed. The last and seventh piece of music represented the combination of all the flavours together.

Following a spectacular grand launch at the Merchant Taylors’ Hall in London, assembled by Done and Dusted, the firm which organised the opening and closing ceremonies of the London Olympics, the organ is travelling the world in a 20ft container, starting with a presentation in New York shortly before Christmas 2014.

The project was a tough one, because we didn’t know what was wanted and the client didn’t know what was possible. There was something of a learning curve to be gone through on both sides and at times progress was frustratingly slow. But it was also a challenge and in spite of all, tremendous fun, not least the enjoyment of the gift of bottles of Johnny Walker’s Special Edition Blue Label Whisky.

View the Specification of the Flavour Conductor

A short video of each flavour is below: (Credit for all videos is Bompas & Parr)

A video of all the flavours is below: