The organ in Waltham Abbey has a long history spanning over 200 years, during which time it has been rebuilt and significantly changed.  The organ started of as a ‘Barrel organ’ located in the West gallery, built in 1819 by the London-based company Flight & Robson, who specialised in this type of instrument.

1850 marked the first of several rebuilds of the organ by J.W. Walker & Sons when the organ was changed from barrel operation to finger and foot operation.  The first rebuild enlarged the organ to two-manuals with pedal pulldowns, the first independent Pedal stop not being added for another ten years.

The organ was rebuilt again in 1879 when it was removed from the West gallery to the North-east corner of the building and increased to three-manuals.  Many of the stops were prepared for and the project was not completed until 1893.

The last major rebuild by Walkers didn’t take place until 1953 when the organ made its return to the West gallery.  At this time the action was electrified with a detached console provided in the Chancel, and the Choir and Pedal divisions considerably enlarged. 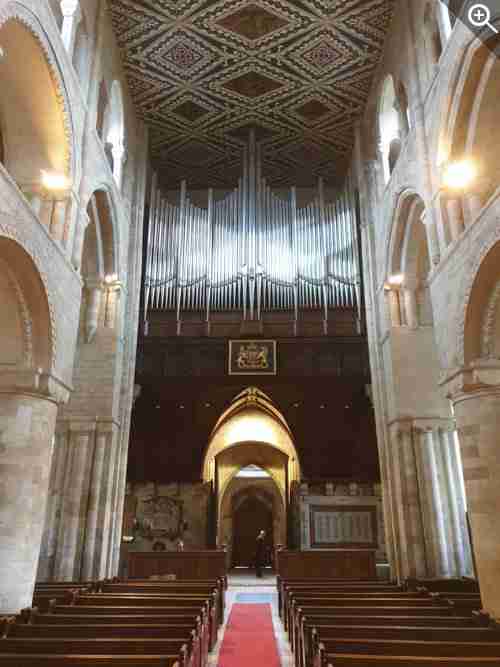 A limited amount of work took place in the 1990s by another firm, primarily aimed at bringing brighter and clearer sounds into the organ’s tonal palette.  However, this work did not address fundamental problems occurring in the organ’s mechanism, mainly caused by the environmental conditions in the Abbey and exacerbated by the lack of maintenance access within the gallery.

In 2008 an appeal was launched, originally with the aim of replacing what was then considered an unsatisfactory organ with a redundant organ from elsewhere, rebuilt in the Abbey.  When changes to the criteria for Heritage Lottery Funding for organ projects occurred (at roughly the same time as a change of Director of Music), the aim of the appeal was reassessed, and thoughts turned to what could be done with the existing organ.  A long tendering process then commenced.

Our recommendation was that the organ should be built afresh from the ground up including a new façade, designed by Noel Gallo, to replace the ‘temporary’ 1953 façade.  All of this would be within a new layout which placed emphasis on good tonal projection and better maintenance access.

New slider soundboards incorporating electro-pneumatic actions were provided for all manual divisions.  The three divisions are placed side-by-side, with the Great taking centre place between the two new expression boxes.  It proved possible for a passage-board to run the entire width of the organ, making for easy access between divisions at soundboard level.

The Pedal division uses some of the 1953 Walker chests, overhauled with all leather-work renewed, placed around the perimeter of the gallery.  A new chest was built to accommodate the Pedal ‘upper-work’, located at the back of the organ, behind the Great soundboards.

Tonal changes to the organ included a new Diapason chorus from 16’ to four-rank Mixture on the Great, which replaced the rather unbalanced Walker chorus.  The basses of the new 16’ and 8’ Diapasons now form the impressive tin façade of the organ.  The Swell regained its original 16’ Bourdon and a new four-rank Mixture to top the chorus.  The Choir division gained new mutation stops at 2 2/3’, 2’ and 1 3/5’ pitches to replace similar, ineffective stops added in a previous rebuild.  The twelve lowest pipes of the former Dulciana unit on the Choir organ were relocated to the Pedal division as its 16’ Dulciana, the remaining twenty pipes being made new.

Towards the end of the design process we were asked by the consultant whether there might be any space for a 32’ reed.  We had several space constraints which we had to keep to, one being an access route up to the North triforium, but after much shuffling of chests and to everyone’s surprise, a viable option was found for incorporating these large pipes.

The twelve pipes, an extension of the Walker 16’ Trombone unit, are placed behind the Choir organ against the back wall of the gallery.  It was necessary for the bottom six pipes to be half-length due to the space, but the effect is excellent none-the-less.

The 1953 Walker console was refurbished and kept in its original position, behind the choir in the Chancel.  The combination action and transmission system were replaced, providing the rebuilt organ with 999 general memory levels and stepper facilities.

The rebuilt organ was opened at a recital by the Abbey’s organist, Jonathan Lilley, on the 29th September 2019, followed with the dedication by the Bishop of Chelmsford the following day.

View the specification of the Waltham Abbey organ (2019)